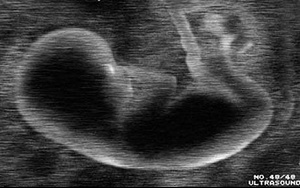 Rather than focus on the controversial aspects, this page will be directed towards an area where all can agree, that area being the concern for the safety for the (wanted) unborn.  This is a matter of great importance to hopeful parents-to-be, the world over.

Many people think that an inadvertent exposure to ionizing radiation for an unborn child (for example, a medical test on the (unaware) mother with radioactive iodine) will result in terrible consequences to the baby, if carried to term, and that the only alternative is an abortion.  One medical specialist - Dr. Brent - who has provided advice to tens of thousands of worried mothers-to-be and their significant others over the past sixty years has probably enabled many thousands of babies to come into this world, babies that might otherwise never have seen the light of day.  Babies that were born healthy and have lived their lives unaffected by their radiation exposure!

Here are some excerpts from an article in the Health Physics News, February 2013 edition about Dr. Brent's life-saving work:

You were kind enough to answer a question for me about radiation exposure during pregnancy last November.  I wanted to share with you that my daughter was born in June 2012, perfectly healthy.  It does not appear that the radiation exposure during early pregnancy harmed her in anyway. She’s hitting all of her milestones and growing beautifully. Thank you again for sharing your knowledge with me and offering my husband and me the reassurance we needed to take joy in the pregnancy.

In December 2012, Robert Brent, MD, PhD, received the above email message from a woman who had contacted the Ask the Experts (ATE) feature of the Health Physics Society (HPS) website with some concerns about a medical exam involving 131I that she had in 2011 while pregnant.

“We have been told to terminate [the pregnancy] by the fertility doctor, but no one else seems to have any advice or information on the potential outcome of the health of the baby,” she had written. “My husband and I do not want to terminate, and only will consider it if there is significant risk to the baby, promising a poor quality of life.”

Dr. Brent quickly responded with a reassuring and factual answer that eased the mother’s concern. She replied after the birth of the baby with a photo and thank you note, one of the thousands he has received (and he keeps them all).

If you have concerns about radiation and pregnancy, check out the Health Physics Society website.  Lots of information can be found there, in their ‘Ask The Expert’ section:http://hps.org/publicinformation/ate/faqs/pregnancyandradiationexposure.html

In a nutshell, in most cases the amount of exposure which the unborn child would receive would not have any negative effects.  In those cases where negative effects are not expected, here is the wording Dr. Brent typically uses: "Your risk for birth defects or miscarriage is not increased over the background risks that all healthy pregnant women face. The background risks for pregnant women with no personal or family history of reproductive or developmental problems is 3 percent for birth defects and 15 percent for miscarriage. All pregnant women face these risks, which we cannot yet prevent. Good luck with your pregnancy and keep in touch."

Dr. Robert Brent is Castle-Connolly Physician of the Year

Alternatively, use the "Contact Us" page to seek further information from 'Radiation Reality'